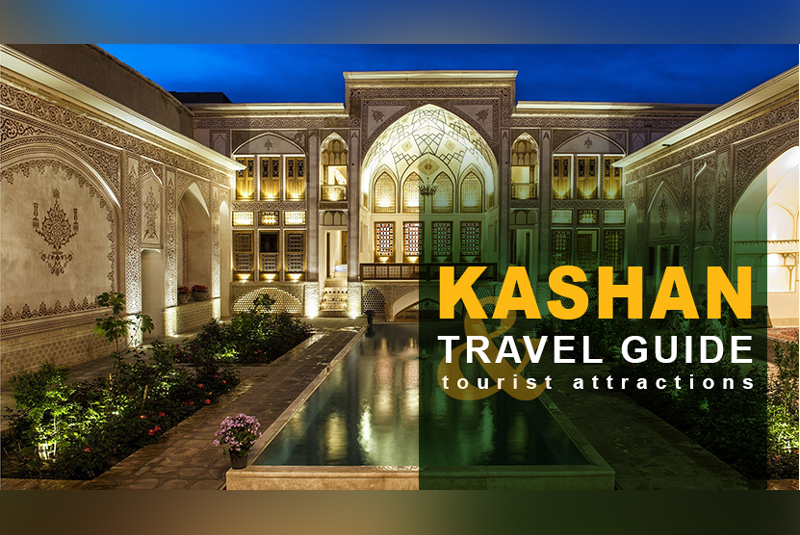 Kashan is a historical county in Isfahan Province. This region is located between Tehran and Esfahan. Kashan was one of the primary centers of civilization. Settlement in this region begun from 7000 years ago. Kashan is one of Iran most attractive spots which plays an important role in Iran tourism. This relatively small county embraces numerous historical places and natural attractions. This city is also so well-known in production and exports of carpets. Read more to know about Kasham Travel Guide & Tourist Attractions.

It’s a typical Persian Garden which is constructed in Safavid dynasty and is an attractive relaxing place. There are two dynamic elements; water and trees, alongside the static architecture. Cypress trees and a lot of fountains and water features are in this garden which its water comes from a natural spring and Persian Qanat. This place is also historically important, because “Amir Kabir”, an important figure in Qajar dynasty, was assassinated in Fin Garden’s bath house. Visit Fin Garden on Iran Classic Tour with Fotors Travel.

In the city of Kashan, there are some really lovely historical houses. Most of them were built in Qajar era. These large and splendid houses have belonged to some wealthy merchants. “Tabatabaei House” is a historical house which was built in the early 1880s, belonged to a wealthy carpet trader and the affluent Tabatabei family. This large house is 5000 m2 with 40 rooms, 4 courtyards and 4 basements. Visit Kashan with Fotros Travel on Iran Cultural Tour.

“Abbasi House” is another historical house in Kashan that’s built in the late 18th century (Qajar dynasty). This large house (5000 m2) was belonged to a wealthy carpet trader. The house is decorated with stainglasses and stuccos. Watch weaving Ziloo, a type of hand-woven small carpet, in Abbasi House in Kashan on Iran Classic Tour.

One of the best Kashan’s tourist attractions,“Borujerdis House” is also another Kashan historical house which was built in 1857 (Qajar dynasty) and belonged to the wife of M. Borujerdi, a wealthy merchant, who was the Tabatabei’s son-in-low. This house has an attractive tall wind tower (40 m). It is one of the best place for Photographer to take photos. Join our Photography Tour for best photos.

It is a traditional Persian public bathhouse. It consists of different parts and by visiting them you will get familiar with the traditions of takin bath in old Iran. This place wasn’t just functional, it also has very beautiful architecture and decoration. Its interior space is covered with beautiful turquoise tileworks. You can also climb the dome-shaped rooftop and enjoy the great view of city. Don't forget to take pictures on the rooftop!

This historical bazaar is located in the center of Kashan. It isn’t that much large in comparison with other cities’ bazaars. But it’s not touristy at all and has a local flavor where everyday stuff could be found more; however, you can find and buy famous carpets of Kashan there. in this bazaar, there is a dome where you can relax and drink a cup of tea from a tea vendor. There are also some other sections like caravanserais and hammams (public bathhouses) that worth visiting.

It’s a historical mosque in Kashan. The interesting point is that this mosque embeds a madrasa too. There is a sunken courtyard that comprises a garden. It has a great brick dome which looks humble and different. Because of the lighting, it’s probably more attractive at night. It is another photographic place for photography.

There is a top tourist attraction and mesmerizing desert near to Kashan that’s called “Maranjab Desert”. It is one of Iran most beautiful deserts. There are lots of adventurous activities that you could do there, including trekking the golden sand dunes, visiting salt polygons of “Namak Lake”, camel riding, night gathering around fire and watching the stunning starry desert sky, staying a memorable night in the Maranjab Caravansary which dates back to Safavid dynasty. Visit Maranjab Desert with Fotros Travel on Maranjab Desert Tour.

There is an ancient underground city under the city of Nushabad, near to Kashan, which dates back to about 1500 years ago. It’s one of the masterworks of ancient architecture. This underground city was curved because this region was insecure in that time. It actually consists of secret passages and rooms; the inhabitants would shelter there in the time of being attacked.

One of the best Kashan’s tourist attractions,“Tepe Sialk” is a large ancient archeological site that’s near to Fin Garden. This site that was excavated by a French team, consists of cemeteries and a place for worship. In the cemeteries, you will see skeletons that were buried with some clay dishes. It’s discovered evidence of settlement from over 7000 years ago which is believed the world’s oldest immobile settlements. It’s fantastic to imagine people living there around 8000 years ago.

There are two exquisite places near to Kashan: Abyaneh & Qamsar. Abyaneh is a well-known village and one of the oldest in Iran (dates back to 1500 years ago). This village is characterized by the color of houses, since their exterior facade is covered with red soil. People of Abyaneh have maintained their traditions Abyaneh Clothing. Visit Abyaneh village on Iran Classic Tour with Fotros Tour Guide.

In Kashan, there are many beautiful historical houses. In some of these houses, in addition to visiting, they are used also as cafés, restaurants and hotels. The most famous ones are: Manouchehri House Restaurant, Abbasi Traditional Restaurant and Talar-e Ayeneh (Mirrors Hall) Restaurant. Having a meal in such traditional atmospheres will make a unique and lifelong memory.

The most famous Kashan souvenir is Rose Water (“Golab”) which is an important flavor in Persian cuisine. Besides rose water, other herbal essences could be bought from Kashan that play important roles in traditional Persian medicine. there are also famous yummy sweets in Kashan including; Kashan baklava, cookies and Haji Badam. The hand-woven carpets from Kashan are also so well-known. Rose Water could be bought from its traditional bazaar, in this case, you will also enjoy exploring in this historical bazaar. 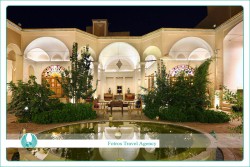 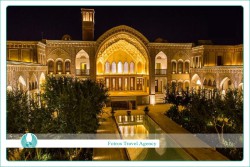 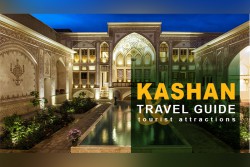