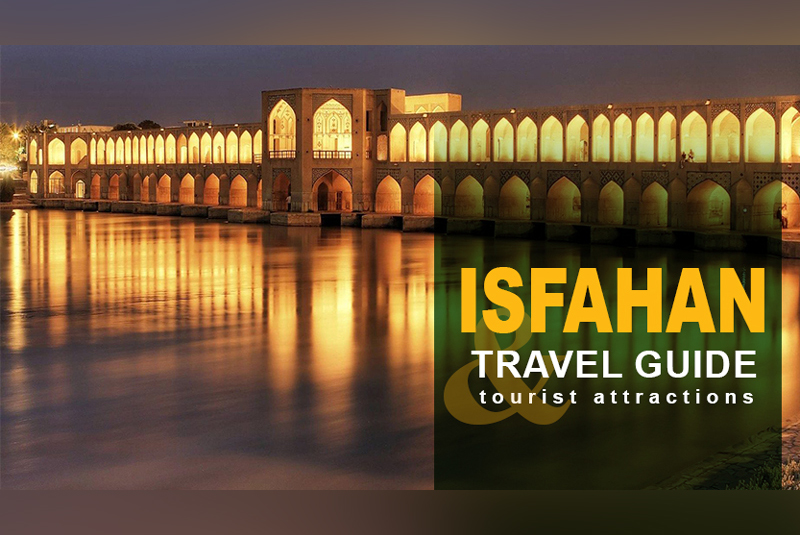 Isfahan, half of the world

Isfahan is a beautiful and historical city in the heart of Iran, this city became the capital of Iran in the 16th century under the Safavid dynasty. Being the capital was an advantage for Isfahan and its people since so many magnificent Persian-Islamic architectures have built in this era and today the city retains much of its glory, and this is the reason that Isfahan is called half of the world. The top priority of every tourist who travels to Iran is visiting Isfahan. Read more to know about Isfahan Travel Guide & Tourist Attractions

Isfahan embraces many historical and wonderful monuments mostly from Safavid dynasty. This city also has a beautiful nature. There are a lot of parks in the city surrounding the Zayandeh Rud river. And also, Sofe Mountain from top of which you will have the view of the whole city it is amazing especially at nights. Top historical sights of Isfahan are:

This is one of the largest squares in the world. This square is surrounded by some other historical buildings including Ali Qapu Palace, Sheikh Lotfollah Mosque, Imam Mosque, and Isfahan traditional bazaar, all of them date back to Safavid era. There are a lot of shops inside this bazaar from which you can buy attractive handicrafts. This huge square once was used for playing polo and today Iranian families gather and have a picnic there.

This splendid palace was built on six floors. There are many rooms and halls in this palace that their walls are decorated with beautiful paintings and plasterworks. You have the wonderful view of Naqsh-e Jahan Sq. from its terrace. The most attractive section of this palace is the music room.

This was a private mosque for one of the most important figures of Safavid dynasty and after that, it became a mosque for women. What makes this mosque more attractive is the dome color which is yellowish cream.

In comparison with Sheikh Lotfollah Mosque, Imam Mosque is larger and it has a unique spiritual and peaceful atmosphere with its lovely blue tile workings.

Isfahan bazaar is a typical traditional Persian bazaar. These bazaars have a linear shape and different sections with lots of shops that are divided according to the profession such as selling carpets, handicrafts, carpets, and much more items. The section which is designated for making copper dishes is interesting despite the loud noises. Qeisariyeh Portal is another attractive part in the bazaar which was decorated with an impressive painting.

This beautiful palace is located near Naqsh-e Jahan Square. The palace is inside a beautiful Persian garden with a large pool. The palace has 20 columns and because of the columns’ reflections in the pool, it’s called Chehel Sotun which literally means forty columns. The palace walls are covered with superb paintings and also some precious old items like carpets are exhibited in some palace rooms.

This is a really large mosque in Isfahan, in which you will see the remains from different eras, this is why this structure is called the museum of architecture. This mosque has many spaces that are although simple but are exceptionally impressive. One of the most attractive parts to visi

This cathedral is located in Jolfa district. In this area, many Armenian people who are Christian are living. So many Armenian deportees during the Ottoman War were resettled in Isfahan by Iran king (Shah Abbas) and this church was built for these people in 1606. The cathedral is really striking especially the interior walls which are covered with fine frescos. It is also interesting to mention that there are many cafés in Jolfa district since Armenians are specialist in making great coffees.

These are two picturesque historical bridges on the Zayanderud River. These bridges are still in use as pedestrian crossings. Unfortunately, in recent years the river generally is dry because of drought. But still many local people and tourists gather in these places and sometimes it will be seen men who are singing traditionally.

Best places to eat in Isfahan

There are many great restaurants and cafes in Isfahan. You can have Persian traditional foods there. The most well-known Isfahan local food is called Beryani, its main ingredient is lamb meat. Best Beryanis will be found in A’azam restaurants with some branches. Khoresht-e Mast is another local food, it’s actually a dessert which made up of yogurt, lamb, saffron, and sugar.

Doogh is a traditional drink in Iran that people of Isfahan have a peculiar habit to eat this salty drink with a sweet which is called Gosh-e Fil. Another dessert is Fereni that is the rice pudding. Near to Naqsh-e Jahan Sq. in Hafez St. you can find a place that sells best Fereni.

In Naqsh-e Jahan Sq., there are many cafés like attractive Azadegan teahouse with strange decoration, Roozegar and Narvan cafés.

There are two traditional and beautiful cafés near to Jolfa Sq., they are Firouz Sherbat café and Arc A café.

There is a restaurant and a café in the Abbasi Hotel, you can choose indoor or outdoor space since the hotel has also a beautiful garden. The waiters are wearing traditional clothes.

Isfahan souvenirs and best places to buy them

Isfahan has the widest variety of handicrafts in Iran. The best ones are hand-woven carpets, enamelware, Khatam, miniature, metalwork, and traditional tablecloths. You can buy these souvenirs from the shops around the Naqsh-e Jahan Square, in this case, you will enjoy visiting historical places plus buying souvenirs, but don’t forget to bargain because the prices are negotiable in Iran.

This is the best hotel in Isfahan that was built firstly as a caravansary which was built in Safavid dynasty about 300 years ago. It was mentioned, you could just use and enjoy its seasonal beautiful outdoor restaurant and café. The website of this splendid hotel is:

This hotel is 5-minute walk far from Si-o Se Pol bridge. In this hotel, breakfast is complimentary. There are also two seasonal outdoor restaurants and a traditional Persian café. There is an outdoor pool along with a garden. The website: http://www.hotelkowsar.com

This hotel with its welcoming and friendly staff is a good choice amongst Isfahan hotels. There is a revolving restaurant on top of this hotel, from which you will have the view of the whole city. The website is: http://asemanhotel.ir

Some of Piroozy Hotel’s rooms have city views. Breakfast and Wi-Fi are included. There’s also an international restaurant and a 24/7 coffee shop. It's website:

This hotel is 16 minutes’ walk from Naqsh-e Jahan Square. The breakfast buffet and parking are free. There are a restaurant and a 24/7 coffee shop in an airy space. There is also a spa, an indoor pool, a sauna, and a hammam as well as a fitness room. The website is: http://www.safirhotel.net