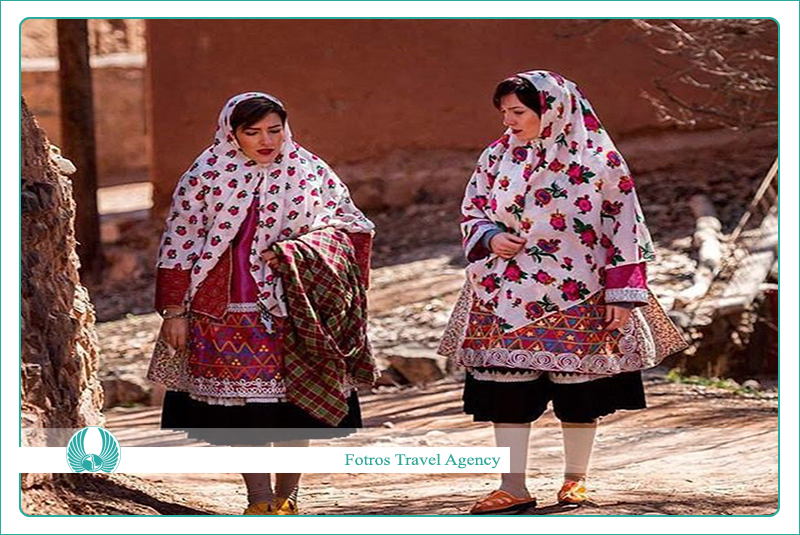 Clothing has always played a great role in human beings life. Iranians pay a considerable attention to their clothing. According to the researches, 32 types of main traditional clothes have been identified in Isfahan province.  These costumes include original Isfahanian dress, Bakhtiari clothing, Abyaneh, Boldaji, Varzaneh, Jarghouyeh, and Gaz garments.

The original traditional clothes of Isfahanian women include:

The original traditional clothes of Isfahanian men consist of:

Abyaneh: An ancient Iranian village, located in Isfahan Province, with a long history which goes back to more than 2000 years ago. It is also known as the Red Village because of its red soil and houses. Abyaneh is a village of living tradition, special clothing, and architectural style, all in red clay. This village attracts numerous Iranian and foreign tourists.

Abyaneh Traditional costumes for women:
The women's clothing of Abyaneh is formed from a blouse, dress, shaliteh (a kind of skirt), scarf, headdress, socks, hoodies, and cotton shoes. The most important point in Abyaneh women’s costume is the use of bright colors, taken from nature’s colors.

Abyaneh Traditional costumes for men:
The men’s clothes in Abyaneh is designed of a shirt, loose black pants, long garment, undershirt, waist shawl, and cotton shoes. What is interesting is that all villagers have a kind of faith towards their traditional clothes and they wear it regardless of their jobs and social status.