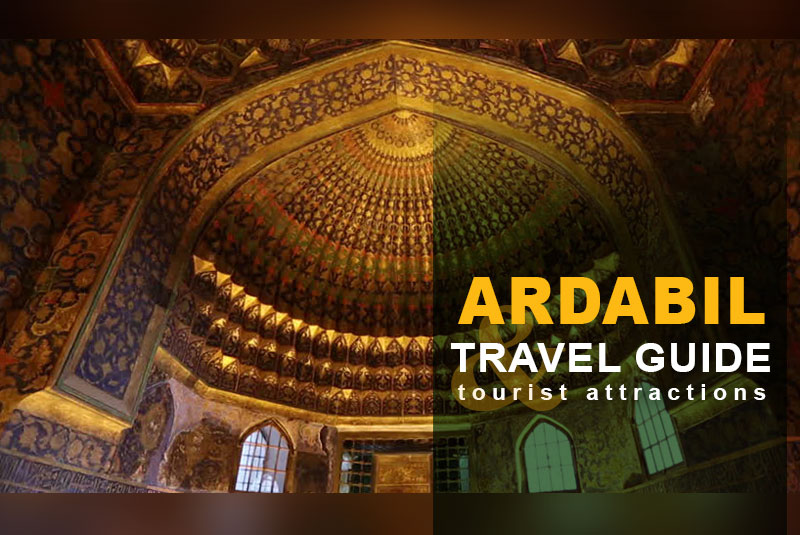 Ardabil is a province in the northwest of Iran. Its capital is the city of Ardabil. This city was a really important city during the Safavid dynasty. The tomb of Shaikh Safi ad-Din, founder of Safavid dynasty, is also located in this city. Ardabil Province has a pleasant and cool climate. This province also embraces natural beauties along with historical monuments. Two highlights of Ardabil Province are Sabalan, the third highest mountain in Iran, and the hot water springs of Sareyn.

Jame Mosque or Jome Mosque of Ardabil was built in Seljuk dynasty on a hill. It’s said that at first it was a fire temple from Sasanian Empire, then in Islamic period this mosque was constructed on remains of that ancient fire temple. There are also interesting inscription in this mosque.

In Iran, there are some historical public bathhouse which have been turned into anthropology museums. One of them is Zahir-ol-Eslam Bathhouse from Il-Khanid Dynasty. Today, in this place, the Ardabil Anthropology Museum is installed. There are many wax statues with traditional clothes. It’s a good place for knowing more about culture and traditions of Ardabil’s people.

Sabalan Mountain, near to the city of Ardabil, is the third highest mountain in Iran with 4811 m high. Most of the year, the peak is covered with snow. Sabalan is actually an inactive stratovolcano and a lake have been formed in the volcano’s hole that is covered with ice from mid-September till early June. This beautiful lake with over 4800 m is the world’s highest lake. From the top of the mountain, you can see the panoramic view of the picturesque surrounding areas.

Sheikh Safi al-Din Shrine is the tomb of the first king of Safavid dynasty and generally, it was a really important political and religious center in that era. In 2010 it was inscribed as a world heritage site by UNESCO. This complex consists of different parts such as a mosque, an astonishing porcelain house (a place for keeping gold, silver and porcelain dishes), a school and a few more.

Ardabil bazaar is a typical one like many other Persian traditional bazaars. Persian bazaars have linear shape and consist of different sections which are divided by profession. It’s still the most important bazaar in Ardabil. In traditional Persian bazaars, you feel that you have travelled back in time.

Sareyn is a small city in Ardabil province which is very popular for its mineral springs. The most important spring spa center is Sareyn.  Since it is near a stratovolcano (Sabalan), its mineral springs contain Sulphur with strong healing properties.

Shahr Yeri is an ancient and mysterious site dates back to 8000 years ago. You may not find such ancient remaining anywhere else on the planet. There are 280 carved stones that are engraved in human forms, ranging from 70 to 360 cm height, without mouth.

Shorabil Lake is the most popular natural attraction in Ardabil. It is so great to walk or cycle around this lovely Lake in the heart of the city of Ardabil. This is the only lake in Iran which is located inside a city. The view of this beautiful lake in front and the Sabalan Mountain in far distance makes a wonderful picture before your eyes, especially during sunset. There are also hotel and restaurant near to this nice lake. 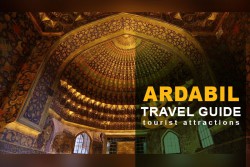